As a follow-up to the previous question about sex, I'd like to offer some resources to use as a backbone for your discussions. Remember, this is not a one-and-done situation. This particular subject is a prime example of why we should be using leadership parenting.  As John Rosemond says, your parenting has to be an attitude--a point of view. Too often we are reactive in our parenting when we should be proactive in the way we present not only our authority, but also our guidance in such areas. Do not fall victim to the notion that all teenagers are rebellious and that once they reach "that stage," they are gonna do what they are gonna do. Nonsense!

The lessons you wish to teach you daughters AND sons should start at a very young age. Your children learn very quickly what your expectations are and what your non-negotiables are. If you waiver and fail to be consistent, then yes, chances are high that you will have a rebellious teenager--but you also probably have a handful already. When a child does not have the simple security of knowing that your yes means yes and your no means no, then you are practically begging your child to test your boundaries.

As a parent, if you are consistent from the very beginning, then those moments of frustration will decrease as your children grow because they will feel secure in the knowledge of where their parents stand. They will know (even when they don't like it) that you have their best interests at heart--that YOU are the parent LEADING them as they grow.

So, parents . . . start early. How about the clothes you allow your children to wear? You may think that a onesie with a cute saying on the front (Diva, Princess, Heartbreaker, Handsome, etc.) is harmless fun, but even those seemingly innocent sayings perpetuate a notion of "Look at me!" Don't let those attitudes take root from the very beginning with your children. Even if the child can't read the words that are plastered across his chest, he will instinctively know that people are reacting and noticing him. Instead, urge your children--even as toddlers--to be humble and modest.

Start teaching your daughters to be ladies and your sons to be gentlemen, and start early--earlier than you think. Model this behavior. Personally, I can't stand that the new norm is for girls to wear shorts under dresses and skirts. I realize that isn't a popular view, but hear me out: what motivation do our daughters have to learn to keep their legs together, learn what they can and cannot play on while wearing a dress (monkey bars, etc.) if they have on shorts to prevent their panties from showing? I know teenage girls right now who sit like cowboys in a skirt because they are so accustomed to wearing shorts under them. Teach them to be ladies, for Pete's sake!

I could go on (shocker, I know), but you get the gist.

As you approach the specifics of marriage, intercourse, and childbirth, use the Bible (there's a lot of really good stuff in there!) You'll find a few verses below to get you started. But keep in mind that these are YOUR children; as with anything else, trust your own gut, and don't completely rely on fodder from others. Dig into the Word on your own. Children always know when you're genuinely sharing or just regurgitating something that you've read or heard.

Genesis 1:28: "God blessed them and said to them, “Be fruitful and increase in number; fill the earth and subdue it. Rule over the fish in the sea and the birds in the sky and over every living creature that moves on the ground.”

Psalm 139:13: "For you created my inmost being; you knit me together in my mother’s womb."

Genesis 2:18-25: "The Lord God said, “It is not good for the man to be alone. I will make a helper suitable for him.” Now the Lord God had formed out of the ground all the wild animals and all the birds in the sky. He brought them to the man to see what he would name them; and whatever the man called each living creature, that was its name. So the man gave names to all the livestock, the birds in the sky and all the wild animals. But for Adam no suitable helper was found. So the Lord God caused the man to fall into a deep sleep; and while he was sleeping, he took one of the man’s ribs and then closed up the place with flesh. Then the Lord God made a woman from the rib he had taken out of the man, and he brought her to the man. The man said, 'This is now bone of my bones and flesh of my flesh; she shall be called ‘woman,’ for she was taken out of man.' That is why a man leaves his father and mother and is united to his wife, and they become one flesh. Adam and his wife were both naked, and they felt no shame."

I Corinthians 6:20: "You were bought at a price. Therefore honor God with your bodies."

I Thessalonians 4:4: "that each of you should learn to control your own body in a way that is holy and honorable."

For girls, the American Girl Doll books The Care and Keeping of You are very good and thorough. Book 1 is for younger girls, and Book 2 is for older teens. My daughter and I took the first book along on a girls' day, and I had her read aloud as we bebopped around that day. It was great! No interruptions, she had my full attention, and it covered things that I might not have thought to bring up. I highly recommend it! I am still searching for a good boy book, but I have also found that most guys I know "ain't reading no book about that stuff!" So . . . to be continued! 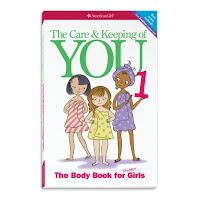 Bottom line: take charge of the subject. Please don't sacrifice your children's knowledge because you're squeamish.

Think of the way that you learned about sex: was it a good experience? How would you have liked to learn about sex for the first time? Did the knowledge you had have a direct result on how you handled yourself when intimate moments arose in your life?

Grow in wisdom for the sake of your children. We know you can do this . . . and we're here for you!


Posted by Happily Parenting at 8:43 PM