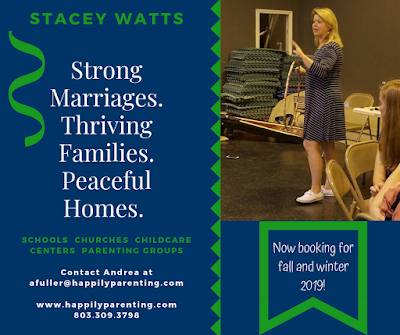 We're still eating ice cream by the pool as often as possible--but y'all, it's time to start thinking about fall and winter! Who needs a fresh start this school year? Marriage? Teens? Pre-schoolers? Family talk in general? You're not alone, and we've got you covered. E-mail Andrea at afuller@happilyparenting.com.

Hope to meet you soon!

--Stacey
Posted by Happily Parenting at 2:56 PM No comments:


Even in the most consistent households, parents will find from time to time their lambs juuuust need to check and see if the rules and expectations are still the same. Say for instance, picking up after themselves.

Yes. That is STILL the expectation.


Rather than throw your arms up in utter disgust and exasperation over what you believed to be a closed case (because after all, you have been intentionally consistent) . . . dude . . . have fun with it!

In our home of late (which houses two teenagers), we are using these moments as an opportunity to learn about adult life when they are on their own. As adults, when we are unable to perform a needed task such as a small home repair, gabage removal, etc., we have to pay for this service. Adulting is fun that way.

Right now in our home, if you are unable to pick up after yourself or complete a task expected of you, Mom or Dad will complete that service for you--yep, you read that correctly.

Each service provided by Mom and Dad LLC will cost $2. $2 per cup, per sock, per trash liner not replaced. Invoices will be issued for payment at the end of each month with payment due upon receipt.

Good thing they have those summer jobs.

Posted by Happily Parenting at 5:39 PM No comments: 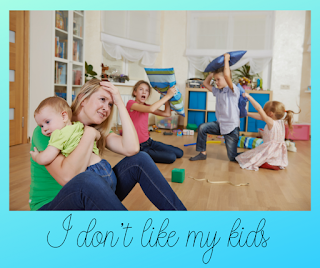 Q: "I have two children, ages 6 and 8. I love my children very much, but I don't really like them most days. What is wrong with me? I feel like a failure as a mother!"

A: First, let me say that there is absolutely nothing wrong with you. The only thing you have working against you is also the same thing you have going for you: you were born! Each of us--born sinners that we are--are also created in Christ's image. We love because He loves us so much so He gave His own Son for us! As parents, how many of us would be able to do such a thing? Most of us can barely fathom the thought of them sleeping over at a friend's house! As John Rosemond puts it, "We are but sinners raising sinners." While we are shooting for sainthood, obtaining wisdom in this life is full of struggle and frustration.

No doubt you love your children, and I would even go so far as to bet you'd give your life for them! For most parents, that is a given, even in cases where the definition of "love" is a bit skewed. But it would be absurd to suggest that you don't relate more to one child over another and that this itself will change as they grow. It's just simple logic and personality understanding. So it makes sense that you won't necessarily "like" your children all the time. My own children and I had this very conversation once.

--Stacey
Posted by Happily Parenting at 5:47 PM No comments: