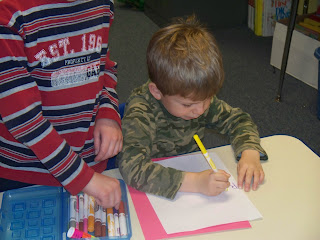 School has begun, and no doubt you probably felt the need for a vacation from the hustle before even day one. After all, there were new clothes to buy, new shoes to find, book bags and lunch pails . . . don’t forget the embroidery . . . meeting the teacher, and the LIST. That list of school supplies that seems to get longer and more specific every year.

As I also began the prep for my own two to return to school (which isn’t until September, as it should be--but that’s a post for another time), I can’t help but mourn the loss of a time when getting new school supplies meant a Trapper Keeper (if you were so lucky), Lisa Frank supplies out the ying-yang, and a few spiral notebooks and pencils.

The joy that our children will never know is getting to CHOOSE.

Nowadays, every folder’s color is predetermined by the LIST, and absolutely no input on the part of the child is considered. Herein lies a problem: as a teacher, I firmly believe that each child needs to develop a sense of independence, which includes developing good study habits. No matter how hard we try to convince ourselves otherwise, no one can organize another or develop his/her study habits, even for children. We all must do these things for ourselves, according to our own strengths, weaknesses, gifts, and abilities (many of which we are also being decided for our children--again--that's another post). Many educators and powers-that-be preach the notion of individualized learning, organizational skills, children becoming lifelong learners, and inquiry-based study. How is it that we can successfully execute any of these when we don’t even trust that our students can pick out a notebook!?

We are stripping them of the independence that we are so desperately trying to create before they’ve even walked into the classroom. It is so much more than the list; it is a sweeping state of mind when it comes to raising our children that terrifies me.

As parents and teachers, we are raising adults, for they are closer to adulthood today than they were yesterday, yet they are becoming less and less equipped to make decisions as adults. Think about it: your teenager probably can’t just go into a store and purchase a pair of jeans and t-shirt without first "selfie-ing" the moment in the dressing room, texting all of (her) friends, waiting for the yays and nays to come in, and THEN tallying these electronic ballots before making the choice to purchase. Large corporations are now starting to prohibit family members (probably mothers) from engaging in the employee/employer relationships.

As a society, we are telling our children that they are incapable of thinking for themselves, that preliminary decisions should be handled by someone other than themselves, and that they really don’t know themselves well enough to even attempt a few choices on their own . . . but at the same time, you're a genius, baby, and you need to always do what's best for you. It is maddening!

My guess is that if we went back to “the good ol' days”--before THE LIST--before everyone had www attached to nearly every facet of human interaction, before this notion that being a good parent required you to forgo absolutely any common sense and to make childhood this complicated enigma that our human race is just now learning to “deal with,” most parents would freak out . . . at FIRST . . .

I wholeheartedly believe that parents genuinely want to slow down. Mothers are tired. Husbands want their wives back. And kids really just want to be kids (minus the over-scheduled agendas and lists aplenty). It can be done, but only if we speak up, stop comparing ourselves to each other, and put what is best for our children first--even if we are the only family on the block to do so.

--Stacey
Posted by Happily Parenting at 1:28 PM No comments: