When the time came to potty train my first-born, I have to admit that I was more than intimidated. Rocking, breast-feeding, nurturing, all that stuff came totally naturally to me. But the idea of bodily fluids all over my house had me briefly lying on the sofa with a wet wash cloth on my head. Then I found these printable charts where you could place a sticker every time your child went to the bathroom. In a totally uncharacteristic move, I printed a bunch of the charts and actually hung one up in my rose-garden-themed bathroom. I figured this process wouldn’t be a picnic for him either, and having cute little pictures on the chart might cheer all of us up.

Of course, I was already going against the core of my nature by printing the charts, so stickers were a bit much to ask. I put a sharpie on top of my John William Waterhouse framed print and told my husband that every time we take our son to the bathroom, we should offer to draw him a picture.

For some reason, my son was mesmerized with vacuum cleaners—so more often than not, that’s what he asked us to draw. (We got really good at drawing them. One time my dad came over and decided to mix it up by drawing a canister style instead of our standard upright. My son announced, “Granddaddy drew me a wagon!”)

After a while, we stopped asking him what he wanted, and we drew what we were in the mood to draw. So my drawings were all about sunshines and flowers and happy faces and the occasional butterfly. My husband continued to draw vacuum cleaners, but he also drew trucks, planes, and even a snowman once or twice (I think it was summer, and any time the temperature goes above 70 degrees, the man longs for a hard freeze).

And then I saw it: a crazy-looking little creature.

I came out of the bathroom and called to my husband, “Hey, I love your squirrel!” He called back, “That’s a dinosaur, and you know I had taken Nyquil when I drew that!”

Unlike me, my husband can actually draw, so the wild-looking critter really cracked me up.

And then it was ON. We could not wait to comment on, compliment, or make fun of the other’s drawings. One day I took extra time to draw a little guy with a top-hat and animated-looking eyes. My husband complimented me on my leprechaun. I had totally forgotten that we were two days away from St. Patrick’s Day, and that little guy was really supposed to be more of a magician than a leprechaun—but why should he ever know that? Weekends were more fun because he was home more, so there were more chances to compare drawings.

As I’m sure you have guessed, my son was still in diapers, having accidents that were every bit as bad as the scenarios that I imagined, but his father and I were having a blast with our utterly worthless chart system. In case you’re wondering, I absolutely DID save the chart with the dino-squirrel.

And if you need to know how to potty-train a toddler boy, please ask Stacey Watts. Even though I eventually did have success, I have no idea what I did to finally train that kid. 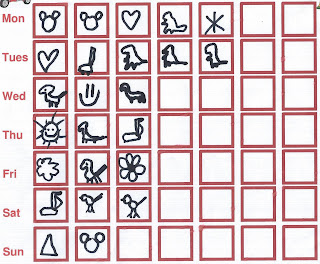