My husband has a friend who is almost like a brother. This guy has had some serious blows over the years, and we’ve tried to be family to him (thankfully, that’s not a chore since this guy is smart, hilarious, and so fun to be with). During one particularly troubled time in his life, though, he asked me and my husband to step back. Well, it was worse than that—he basically told us to butt out and end our friendship.

I was shocked. Heart-broken. And furious.

Amid asking my husband repeatedly, “What did you do to him? What did you say to him? What the heck happened between you two?” I had plans to call this dude up, bless him out, and then make him a big dinner and demand to know what in the world was going on. My husband kindly but firmly told me, “You’re going to respect his wishes.” And my instinctual response to that was, “Who says you can tell me what to do?”

You know, the whole Biblical concept of submission has never really been a big deal around here. During pre-marital counseling, my pastor asked me how I felt about submission. “You went to a fairly liberal female college, and there’s a firm foundation of feminism there. I’m just curious about how you feel about submission?” I smiled my glowy bride-to-be smile and replied, “I don’t have to worry about that. When you’re marrying someone who’s brilliant and kind and selfless, you never have to worry about how he will lead a family.”

I still mean all of those things, but the real reason that I don't think about this concept often is that, frankly, we’re on the same page 99 percent of the time. But that summer we lived the 1 percent. He was not handling this my way. He was not handling this the RIGHT way. He was wrong. I told him so. And I seriously considered ignoring his direct order—yes, it was an order—and doing what I wanted to do anyway. I couldn’t do that though . . . it’s so rare for him to give me a direct order like that, and when he does, he means business.

I poured out my dilemma to my Proverbs 31 lady. In the moment, she didn’t say much. But the next day, we were chatting about how she and her daughter had originally planned to travel that day, and their husbands got on the phone and re-routed their travel plans. In their excitement to be together, they didn’t consider that it was the day of a major football game (traffic and delays). She said to me, “Isn’t it kind of the Lord to give us husbands who protect us and lead us?” Is she saying that women are dumb? Absolutely not. We’re loving, though, and sometimes our hearts get so pumped up that they knock our heads out of the driver’s seat and take the wheel.

I cringe when I hear the advice, “Follow your heart!” I don’t know about y’all, but my heart has made some really stupid decisions—and not all of them took place inside a mall either.

Okay, so I pouted. I fussed. I rephrased the question a dozen times and asked my husband if we could contact his friend. The answer was always no. I finally shut my mouth and opened my heart and started to pray. I prayed for our friend and I prayed for my husband. About six months later, our friend initiated contact with my husband, and their friendship has been restored.

I’ve heard submission defined as “strength under control.” In this situation, I can wholeheartedly agree with that definition. I know I’m a handful. I know I talk more than I listen, and I know that I have the instinct to “follow my heart” (even when it’s a big ol’ liar). Thankfully, even after nearly sixteen years of marriage, I still believe what I told my pastor that day. God chose this man for me and, as always, He chose well. Someone has to lead the family; God says that someone will be my husband. 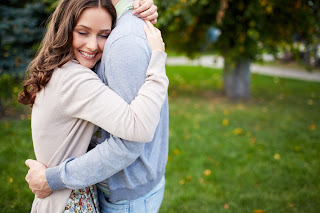 Posted by Happily Parenting at 7:28 PM